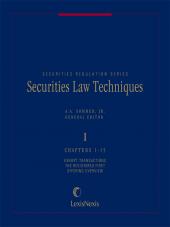 Contributions from over 50 leading practitioners in the field. The experts provide thorough treatment of securities registration and requirements exemptions therefrom, public reporting and recordkeeping requirements, common transactions (including the specific tasks of counsel, underwriters, accountants and company officers and directors), corporate charges and business combinations, as well as complete guidance for representing a client in securities litigation.

David Martin is a Senior Counsel with Covington & Burling LLP. He advises corporations and other clients in corporate, corporate governance, securities regulation, and transactional matters. He has led teams of lawyers in corporate finance, business combination and other change of control transactions, including public offerings, spin-offs, proxy contests, and tender offers. He counsels boards, senior executives, and investors in a range of governance policies and procedures. His practice also has involved enforcement cases before the U.S. Securities and Exchange Commission (SEC), internal investigations, and corporate compliance issues. David's career includes seven years of service with the SEC, where he was the Director of the Division of Corporation Finance. In this position, he was the senior executive officer for the agency's program for review of reports of public companies to securities markets and investors. Previously at the SEC, David served as special counsel to the Chairman. David is a frequent lecturer and author of articles. He has also is a member and former chair of the Corporate Laws Committee of the American Bar Association's Business Law Section.

Mr. Sommer was the Chairman of the Public Oversight Board of the American Institute of Certified Public Accountants; Deputy Chairman, Capital Markets Forum, International Bar Association; and Member, Board of Governors, NASDR.

He received an A.B. from Notre Dame, and a J.D. from Harvard Law School. He received an LL.D. from Cleveland State University in 1976.

Mr. Sommer participated in programs with respect to capital formation in Manila, Phillippines; Jakarta, Indonesia; Seoul, South Korea; Buenos Aires, Argentina; Rio de Janeiro, Brazil; and Tokyo, Japan. In addition, he served as consultant to the governments of many countries, including Jordan, Taiwan, Egypt, and the People's Republic of China, with respect to securities regulation. He served as consultant to the Inter-American Development Bank with respect to the organization of a securities regulatory body in Trinidad and Tobago. He sits on the Advisory Board of several publications, including Securities Regulation and Law Report (BNA), Journal of Corporation Law, The Corporate Director, Corporate Accounting, and The Review of Securities Regulation. In addition, he served on the Advisory Board of the University of Southern California SEC and Financial Reporting Institute.