An Island Apart is a great resource to lawyers who practice international law and businesspeople dealing with the U.K. and the E.U.
Publisher: American Bar Association 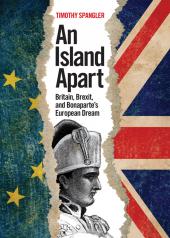 The book takes a humorous journey, and examines, country by country, the failures of European legal and political institutions that contributed to and led up to the Brexit vote. An Island Apart is a great resource to lawyers who practice international law and businesspeople dealing with the U.K. and the E.U.

Many titles covering this topic focus on a micro-level on the behind-the-scenes political machinations and maneuvering in the build-up to the June 2016 Brexit referendum. An Island Apart looks at the subject from a more macro-European perspective, focusing on the failure of European legal and political institutions in the years leading up to the BREXIT vote, and attempts to put the historic decision into broader contexts for American readers.

In short, the purpose of this book is to take Europe off its four-point Corinthian white marble pedestal. The breathless way in which an American journalist describes the “magic” of their first Eurostar train trip from London to Paris does frankly become tiring when heard repeatedly over the years. Rather than indulge in lazy exercises in wish fulfillment, we should instead view the continent with a critical (and at times admittedly cynical) eye to see what practical and pragmatic lessons it can teach us.

Author Timothy Spangler is the Director of Research of the Lowell Milken Institute for Business Law and Policy Adjunct Faculty at UCLA Law. Spangler advises on the structuring and operation of a wide variety of investment funds, including hedge funds, private equity funds, venture capital funds, mezzanine funds, film funds and funds of funds. He has experience forming and structuring funds in numerous jurisdictions, including the United States, the United Kingdom, the Cayman Islands, the Channel Islands, the Isle of Man, Bermuda, Mauritius, the Netherlands, Luxembourg, Germany and Ireland. He also advises regularly on the ongoing compliance obligations of investment management firms under the U.S. Investment Advisers Act of 1940 and the U.K. Financial Services and Markets Act 2000.