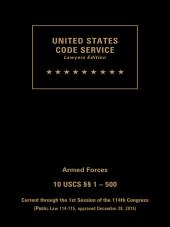 Using the exact language of Congress, USCS gives you an annotated, comprehensive reference to all 50 U.S. Code titles, the Constitution and selected rules of federal courts and administrative agencies.

USCS Mini-Sets are designed to be kept in your office. No more frustrating searches for misplaced library copies.