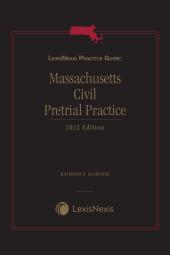 Containing over 60 checklists, 150 practice tips, and dozens of crucial forms, this portable, task-oriented guide to the technical and legal aspects of pretrial practice provides authoritative analysis and solutions in the following areas:

eBooks, CDs, downloadable content, and software purchases are noncancelable, nonrefundable and nonreturnable. Click here for more information about LexisNexis eBooks. The eBook versions of this title may feature links to Lexis+® service for further legal research options. A valid subscription to Lexis+ is required to access this content.

Mr. Ausrotas has twice been trial counsel on "Top Ten" verdicts awarded for the year in Massachusetts. In 2019, working together with Ed Foye of Arrowood LLP, Ray was lead attorney on a complex jury trial involving both direct and derivative shareholder claims, sounding in breach of fiduciary duty. Following three weeks of evidence and testimony, the jury awarded a favorable $16 Million verdict, which was one of the “Top 10” awarded by a jury in Massachusetts in 2019 – and the only business dispute among the Top 10. In 2006, together with Lisa Arrowood as first-chair (and their former colleague Nick Carter) Ray tried a six-week case which recovered $2 Million, the 10th largest jury verdict that year, on behalf of an autistic boy, against his school's medical director, as well as various administrators and teachers, arising out of physical and emotional abuse. Mr. Ausrotas has been counsel on a number of reported decisions, including: Techtarget, Inc. v. Spark Design, LLC, et al., 746 F. Supp. 2d 353 (D. Mass. 2010); Thibeault v. Total Beauty Media, Inc., 2010 U.S. Dist. LEXIS 46451 (D. Mass. May 12, 2010); and Confederate Motors, Inc. v. Terny, 859 F. Supp. 2d 181 (D. Mass.).

Mr. Ausrotas served as the Chair of the Civil Litigation Section for the Massachusetts Bar Association Section during its 2011–12 term. He is also a member of the American and Boston Bar Associations, and—as published in Boston magazine—was selected to the "Top 100" list for both New England and Massachusetts, each year, from 2014 through the present, by SuperLawyers, an independent peer-review rating service, in the area of Business Litigation. He had previously been named a "Rising Star" by that service in the area of General Litigation for many years. He was inducted as a Fellow in the Litigation Counsel of America, a trial lawyer honorary society composed of less than one-half of one percent of American lawyers, in 2015. Ray has also earned an AV® Preeminent™ Peer Review Rating from Martindale-Hubbell® in the categories of Litigation and Business Law, the highest recognition achievable for professional ability and ethics. Since 2017, Mr. Ausrotas has been recognized annually by Best Lawyers®, a national peer review organization with an over thirty-year history, in the areas of Commercial Litigation, and Litigation—Regulatory Enforcement, and in 2021 was recognized as "Lawyer of the Year" for the Boston area in the latter category.

Ray has served multiple times as a Trial Advisor for the Trial Advocacy Workshop at Harvard Law School, as an adjunct faculty member on appellate practice at New England School of Law (now New England Law), and guest-lectured on admissibility of electronic evidence at Boston University Law School. He has written columns on legal issues for local newspapers, and authored several articles published in legal publications including for the ABA Section of Litigation. . Ray has chaired and participated as a panel member on several CLE presentations on trial and litigation issues, and is also the lead author of Massachusetts Civil Trial Practice, a LexisNexis Practice Guide that has been published and regularly updated since 2014.

Prior to attending George Washington University Law School, Ray worked as an assistant cross country coach at Brown University, where he received his undergraduate degree, with honors, in English & American Literature. Immediately after college, he worked on both Congressional and Massachusetts legislative committees; his policy work was focused in the areas of science and technology, campaign finance, voter registration and ballot access, as well as ethics and conflict-of-interest laws.