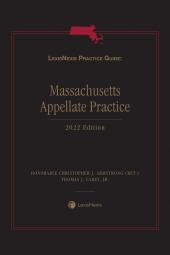 LexisNexis Practice Guide: Massachusetts Appellate Practice is a practice - oriented resource that assists trial attorneys in handling every stage of the appeal process from final judgment in a Massachusetts trial court to rescripts and further proceedings in trial court, rehearing in the Massachusetts Supreme Judicial Court, and appealing judgments to the United States Supreme Court.

Trial litigators will get detailed step-by-step coverage of the appellate process, as well as practical information about appellate practice in the various Massachusetts appellate courts from Hon. Christopher J. Armstrong (Ret.), former Chief Justice of the Massachusetts Appeals Court, and Thomas J. Carey, Jr., both affiliated with Hogan Lovells in Boston.

eBooks, CDs, downloadable content, and software purchases are noncancelable, nonrefundable and nonreturnable. Click here for more information about LexisNexis eBooks. The eBook versions of this title may feature links to Lexis+® service for further legal research options. A valid subscription to Lexis+ is required to access this content.

Justice Christopher J. Armstrong was one of the six original justices of the Massachusetts Appeals Court, appointed to that position by Governor Francis W. Sargent when the court was created in the summer of 1972. He was appointed Chief Justice of the Appeals Court by Governor Paul Celluci in 2000. Under the Massachusetts mandatory retirement law, he stepped down as the Appeals Court's Chief Justice (and as the senior member of the Massachusetts judiciary) in 2006. Thereafter Justice Armstrong served the court for two additional years as a retired recall justice, leaving finally in 2008, having served the Court as a justice for the first thirty-six years of its history. During his tenure, he authored more than 1,100 signed opinions.

In 2006, the Boston Bar Association awarded Justice Armstrong its Citation of Judicial Excellence. The Massachusetts Bar Association awarded him its highest judicial award, the Chief Justice Edward F. Hennessey Award for exceptional contributions to the administration of justice in the Commonwealth. In 2007, Justice Armstrong was named by Massachusetts Lawyers' Weekly as one of thirty-five persons who had most influenced the practice of law in Massachusetts over the previous thirty-five years.

Prior to becoming a judge, Justice Armstrong, a graduate of Yale and Yale Law School, was a law clerk in the Superior Court. He lived a year in Nigeria under the Massachusetts Institute of Technology Fellows-in-Africa Program. Upon his return, he served several months as Executive Clerk to Chief Justice G. Joseph Tauro; then, in roughly two-year intervals, as Assistant Legal Counsel under Governor John A. Volpe, Assistant Attorney General under then Massachusetts Attorney General Elliot L. Richardson, and as Chief Legal Counsel under Governor Francis W. Sargent. In 1970, Armstrong was named as one of "Boston's Ten Outstanding Young Men" by the Boston Junior Chamber of Commerce. (The award did not become gender-neutral until 1985.) He was serving as Massachusetts Undersecretary of Administration when he was appointed to the new Appeals Court in 1972 by Governor Sargent.

Justice Armstrong was appointed by the Supreme Judicial Court to be the first chairman of the Committee on Judicial Ethics, and served in that capacity for his maximum eligibility, ten years. Justice Armstrong has served as co-chair of the Administration of Justice Committee of the Boston Bar Association, a member of the board of the Massachusetts Law Review, and a member of the Boston Bar Association's Task Force on the Causes of Wrongful Convictions.

In retirement, Justice Armstrong is affiliated with the Boston office of Hogan Lovells, a global law firm with an outstanding Appellate and Supreme Court Litigation Practice. He has been active in the Council of Chief Judges of State Courts of Appeal, affiliated with the National Center for State Courts, as well as in a number of civic and charitable activities in Newburyport and Newbury, MA.

View all products by THE HONORABLE CHRISTOPHER J. ARMSTRONG (RET.) (1)

Mr. Thomas J. Carey, Jr. specializes in appellate practice, civil or criminal, in state or federal courts. He is affiliated with the Boston office of Hogan Lovells. He is also an adjunct professor at Boston College Law School. with which he has had a long association as a student, alumnus, and faculty member. He holds a J.D. degree from Boston College Law School, where he earned several academic awards, including Order of the Coif, and received an LL.M. degree from Harvard Law School. His distinguished legal career includes federal clerkships with United States District Court Judges Andrew A, Caffrey and Frank Murray in the District of Massachusetts, a decade as a full-time law teacher at Suffolk and Boston College Law schools, government service as the Appellate Attorney of the Major Violators Division in the Suffolk County District Attorney's Office, and private practice.

A former Director of Advocacy Programs at Boston College Law School, Mr. Carey has long been active in teaching advocacy skills to students and lawyers alike. He has coached championship moot court teams, and frequently lectures at bar association programs on legal writing and appellate advocacy. He created an innovative seminar in Appellate Advocacy in which students handle real life cases and taught the course at BC Law for twenty-five years. He currently teaches an Amicus Clinic in which faculty and students prepare and submit amicus briefs to the courts on major legal issues of the day.