Lawyers, Liars, and the Art of Storytelling: Using Stories to Advocate, Influence, and Persuade 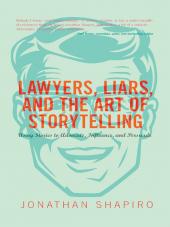 Storytelling--what it is, why it matters, how to do it—is not a metaphor for legal advocacy. It is legal advocacy itself, and it is not limited to jury trials or court appearances: It relates to every aspect of a lawyer's work.

The practice of law is the business of persuasion, and storytelling is the most effective means of persuading. A credible lawyer capable of telling a well-reasoned story that moves the listener will always beat the lawyer who cannot. But just recognizing the centrality of storytelling to the legal profession is not enough. Lawyers should also study the basic structure and elements that apply to stories, how they work and why, as well as the principles that have guided great storytellers for thousands of years. Part prescriptive teaching, part memoir, always entertaining and never lecture, Lawyers, Liars, and the Art of Storytelling provides storytelling lessons gleaned from years of trial practice and television writing, wrapped in—what else?—great stories.

Jonathan Shapiro is Of Counsel at Kirkland & Ellis for entertainment litigation. He also serves as the Chairman of the California Commission on Government Oversight and Efficiency. A graduate of Harvard University and Oxford University, where he was a Rhodes Scholar, he received his law degree from the University of California Berkeley School of Law while working full-time as a staff writer for The Recorder, San Francisco. After graduation, he joined the U.S. Department of Justice Criminal Division, Organized Crime & Racketeering Section, Washington D.C., through the Honors Program, and was later appointed as an Assistant United States Attorney for the Central District of California. He served as Attorney General Janet Reno's Special Assistant for the Congressional hearing into the siege of the Branch Davidian Compound in Waco, Texas.

After being Of Counsel at O'Melveny & Myers, he was appointed Chief of Staff for newly elected California Lieutenant Governor Cruz Bustamante. He wrote for David E. Kelley's series' The Practice and Boston Legal, for which he received a Peabody Award and two Humanitas Awards. Shapiro also created, wrote, and was the show-runner for three of his own short-lived series, and wrote for the critically acclaimed NBC show Life, as well as NBC's The Firm. Shapiro also taught as an adjunct law professor at the USC School of Law, and handled political asylum cases pro bono. He is the founding Director of the Public Counsel Emergency Fund for Torture Victims. He recently won an Emmy at the 2014 National Capital Chesapeake Bay Chapter's Emmy Awards for his first short-film, Fair and Free, based on his own script and narrated by Associate Justice Sandra Day O'Connor. Shapiro is married to television writer Betsy Borns (Friends, Roseanne, All of Us). They have three children.