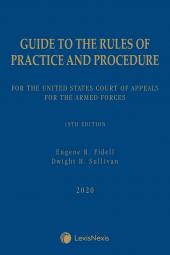 EUGENE R. FIDELL is of counsel at the Washington, D.C. firm Feldesman Tucker Leifer Fidell LLP. He served as a judge advocate in the U.S. Coast Guard and co-founded the National Institute of Military Justice. He wrote Military Justice: A Very Short Introduction (Oxford 2016) and is a coauthor of Military Justice: Cases and Materials (Carolina Academic Press 3d ed. 2020).