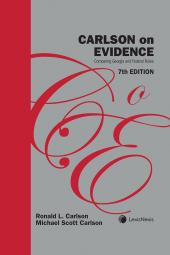 To date, this evidentiary title has been cited by the Supreme Court of Georgia and the Court of Appeals of Georgia in over 50 separate opinions. The Georgia Supreme Court referenced the authors of Carlson on Evidence when it adverted to “leading commentators on the new [Georgia] evidence code.”

Since its first edition, Carlson on Evidence, has focused on a comprehensive, rule-by-rule, comparative examination of Georgia’s old evidence code, new 2013 evidence code and the federal counterpart. Each new edition expands upon its unparalleled content with a wide array of updated Georgia and federal evidence, authority and analysis.

The accessible, user-friendly format allows readers to approach and consider the rules presented, both state and federal, and provides:

The appendix provides the text of the Georgia and Federal Rules of Evidence in their entirety, as well as testimonial evidence (“Crawford” and “Bruton” issues).

When the courts have not had specific correlation of the Georgia Evidence Code to the Federal Rules of Evidence, they have turned to Carlson on Evidence as secondary authority to identify whether a rule closely follows the federal counterpart or if prior Georgia case law interpreting former code sections should apply. The scholarly opinion in Parker v. State observes that, unlike some other evidentiary code patterns, the 2013 Georgia statute contained commendable specifics respecting its application. The decision then adds this: “Leading commentators on the new Evidence Code agree with this conclusion and suggest why the Georgia provision differs from the federal model in this respect. Professors Ronald and Michael Carlson explain that the new Georgia Code was written to prevent courts from creating patchwork exceptions to the applicability of the rules of evidence, which had been a criticism of the old code.”

“… I can say that there is no more respected or essential resource for Georgia legal advocates than Carlson on Evidence. Providing a unique blend of scholarly insights and practical guidance, Carlson on Evidence is unparalleled in its presentation of the most integral body of material for trial attorneys, namely, the rules of evidence.”
—Foreword to the Seventh Edition by Hon. Fani T.Willis, District Attorney, Fulton County, Georgia

“For good reason, on nearly every bench, in most libraries, and in a legion of law offices across our state, can be found this volume and its preceding editions. The combined efforts of Professors Ronald and Michael Carlson have generated a ‘go-to guide on evidence’ which has benefited a generation of Georgia litigators. … By sifting statute through opinion, and commentary through practical application, the Carlsons provide us a road map for understanding and applying even the most complex legal principles.”
—Foreword to the Fifth Edition by Bobby L. Christine, Attorney at Law, former United States Attorney for the Southern District of Georgia, former Chief Magistrate, Columbia County, Georgia

“If you are a trial lawyer, Carlson on Evidence is your ‘go-to’ book. This book is designed for the courtroom battle and allows a trial lawyer in the middle of battle to find the right rule and the right citation.”
—Foreword to the Fourth Edition by Bruce S. Harvey, Attorney at Law

“This text is the ideal tool for Georgia judges and attorneys at this point in the evolution of Georgia evidence law. I wholeheartedly recommend it to you. This text is a major contribution to the legal literature in Georgia, and it should be on the shelf of any Georgia judge or litigator.”
—Foreword to the Third Edition by Edward J. Imwinkelried, Professor, University of California Davis School of Law

“This book is a first-class resource for all members of the Bar.”
—Foreword to the First Edition by Robert D. James Jr., Attorney at Law, former District Attorney, Dekalb County Georgia, Stone Mountain Judicial Circuit

Be sure your law library, trial notebook and appellate binder include this latest edition of Carlson on Evidence.

Multiple-volume discounting is available for this title.

Ron Carlson was awarded the Lifetime Achievement Award by the Georgia Trial Lawyers Association, as well as the Federal Bar Association’s highest honor, the Earl Kintner Award. The ABA recognized him with the ALI-ABA Harrison Tweed Award, their top award for CLE contributions at the national level. He has received every faculty honor presented by the law school student body at least once: the Student Bar Association Faculty Book Award for Excellence in Teaching, which is now the C. Ronald Ellington Award for Excellence in Teaching, the John C. O'Byrne Memorial Award for Significant Contributions Furthering Student-Faculty Relations and the Student Bar Association Professionalism Award. He was the first Georgia Law professor to receive the Josiah Meigs Award for Teaching Excellence from UGA. He also was awarded the 1987 Roscoe Pound Foundation's Richard S. Jacobson Award, honoring a single national law professor for the teaching of trial advocacy. Professor Carlson was the lead and sole attorney for indigent prisoners in two significant U.S. Supreme Court appeals, Long v. District Court (establishing indigent habeas applicant’s right to transcript) and Johnson v. Bennett (prisoner freed after 34 years of confinement). He is the author of 15 books on evidence, trial practice and criminal procedure, including the book Carlson on Evidence, co-authored with son Mike Carlson. Carlson regularly comments on WSB radio on high-profile Georgia criminal cases.

Mike Carlson, who holds an “AV Preeminent” (highest possible) Martindale-Hubbell peer review rating, received his A.B degree from the University of Georgia and his J.D. degree from Washington and Lee University in 1992, where he earned, among other distinctions, the Virginia Trial Lawyers Association Award for his “excellence in demonstrating the talents and attributes of the trial advocate.” After first engaging in private practice, where he focused on civil litigation and media law, Carlson started as an assistant district attorney working in various district attorneys’ offices. During his career as a prosecutor to-date, Carlson has successfully handled many high-profile cases and appeals, including death penalty trials and landmark cases under Georgia’s new Evidence Code. Immediately prior to accepting his current appointment, Carlson served as chief counsel and ethics officer for the Georgia Bureau of Investigation – Georgia's Statewide Law Enforcement and Investigative Agency – also serving as Deputy Director of the Legal Division of the GBI when that division was created by statute in 2020.

An author and frequent speaker on issues of evidence, trial practice, and criminal procedure to Georgia’s bench and bar, Carlson has served on the adjunct faculty of Atlanta’s John Marshall Law School and Emory University School of Law, and is a mentor and lecturer at the Gary Christy Memorial Trial Skills Clinic at the University Of Georgia School Of Law. In 2015, Governor Nathan Deal appointed Carlson to the Georgia Court Martial Review Panel. Among the professional awards and recognition that Carlson has received include: Eagle Award, the highest honor bestowed upon a state-level attorney by Georgia’s three United States Attorneys; Faculty Medallion from the Institute of Continuing Judicial Education of Georgia for consistently outstanding presenter ratings; Prosecuting Attorneys’ Council of Georgia’s J. Roger Thompson (now Thompson-Jones) award for training beginning level prosecutors; selection as a Master in the Joseph Henry Lumpkin Inn of American Court; named by James Magazine as one of “the most influential lawyers in Georgia”; and special recognitions from the District Attorneys’ Association of Georgia and the Georgia Gang Investigators Association.