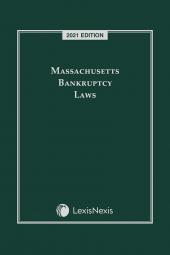 This newest edition of Massachusetts Bankruptcy Laws is a compact, easy-to-use and portable reference guide you can carry into the courtroom with you. This publication is critical to the practice of bankruptcy law in Ohio, everything from Voluntary Petition for Individuals Filing for Bankruptcy to Notice of Chapter 11 Bankruptcy Case (For Corporations or Partnerships).

Updated every year so you have immediate access to current law, this is the reference your clients want you to have. Whether you are purchasing a single copy or buying in volume for every attorney in the firm, this is the complete and affordable bankruptcy reference, only from LexisNexis, the name you trust for all your legal research needs.