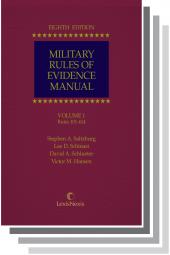 This newest edition of the Military Rules of Evidence Manual is the only publication of its kind available to both military and civilian attorneys and to those studying the system. An authoritative 2-volume case finder, the Manual includes virtually every military court decision applying a military rule of evidence since 1981. First published in 1980, the Manual has been cited hundreds of times by military, federal, and state courts. The Rules are fully annotated and intuitively organized, showing you:

View all products by Stephen A. Saltzburg (2)

David A. Schlueter is the Hardy Professor of Law at St. Mary's University School of Law in San Antonio, Texas. Professor Schlueter teaches evidence, trial advocacy, and constitutional law, and has served as both criminal trial and appellate counsel. He has authored, co-authored, or edited 12 books on procedure and evidence, including the two volume work, FEDERAL EVIDENCE TACTICS (with Imwinkelried). His writings have been cited frequently by state and federal courts, including the Supreme Court of the United States, and legal commentators. Before joining the faculty at St. Mary's in 1983, he served on active duty as an Army JAGC and for two years as legal counsel for the Supreme Court of the United States. He is a fellow in the American Law Institute and a Life Fellow in the American Bar Foundation. From 1988 until 2005, he served as the Reporter for the Federal Rules of Criminal Procedure Advisory Committee.

View all products by David A. Schlueter (6)

Lee D Schinasi is a Lieutenant Colonel in the United States Army. He is author of numerous articles on criminal law practice and was a criminal law instructor at the Army's Judge Advocate General's School. He has also served in the Office of the Judge Advocate General, as well as at Army Government Appellate Division and in the field as a trial and defense counsel. He is currently attending the United States Army Command and General Staff College at Fort Leavenworth. 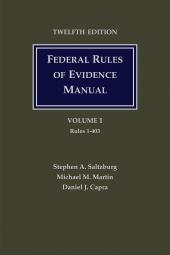