Sections 409A and 457: Answers to 250 Frequently Asked Questions 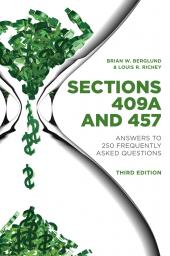 After Tax Reform, Section 409A and 457 remain the important income tax law governing nonqualified deferred compensation plans. Ths Q & A book is now more than ever a necessary resource.

New and important developments have emerged in the form of IRS guidance and case law since the first edition was published in 2011. This edition provides significantly more guidance on questions regarding procedures for correcting errors in documentation that resulted from the release of IRS Notices 2010–6 and 2010–80 and questions regarding administrative error corrections arising from the operation of nonqualified deferred compensation plans under the complex and often confusing guidance under Section 409A. Since then, in June 2016, the IRS released additional proposed Section 409A Regulations and also the long-overdue proposed regulations for Section 457 relating to non-qualified plans of tax-exempt organizations.

In addition to providing correction procedures, the IRS Notices provide guidance on drafting documents subject to Section 409A by high-lighting language that gives rise to documentary errors under Section 409A. Of course, with that guidance came a host of additional questions.

This third edition is another helpful step toward addressing the important questions routinely raised by this complicated and broadly applicable law.