Provides police, federal special agents and investigators, governmental administration and security agencies, prosecutors, and defense attorneys with practical advice on how best to prepare cases for ultimate presentation in court and makes them aware of the most likely points at which their evidence is vulnerable and subject to attack.
by Thomas P. Mauriello (Author)
Publisher: Matthew Bender Elite Products 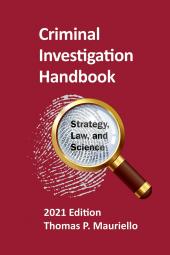 Criminal Investigation Handbook was completely reorganized and rewritten in 2021 and contains information to guide you through each element of a criminal investigation. Updated annually, Criminal Investigation Handbook provides you with current information in a concise softcover format that is easy to understand and apply to your investigation. Whether you are a law enforcement officer, prosecutor, or criminal defense lawyer, you will find the information in this police investigation book useful to your case. Covering the practical aspects of an investigation as well as pertinent legal analysis - and including a wealth of illustrations, checklists, and forms - this title will prove itself invaluable to your case. A new table of illustrations has been added after the publication table of contents to make them easier to find. 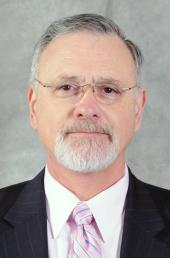 Thomas P. Mauriello is an educator, author, consultant, and public speaker. He retired from federal service in 2012, after 30 years of service with the U.S. Department of Defense (DoD). His assignments with DoD included Special Agent; Chief of Police; Senior Polygraph Examiner; Director, Occupational Health, Environmental and Safety Services; Director, Interagency OPSEC Support Staff (IOSS); Deputy Director for Security Education, Training and Awareness; Congressional Staff Investigator for the U.S. Senate Permanent Subcommittee on Investigations; and Chief of Polygraph for the Associate Directorate for Security and Counterintelligence. He is a former police officer and criminal investigator.

He is the founder and CEO of the forensic consultant company, ForensIQ, Inc. His company provides forensic investigation services; criminal case & evidence assessments; security & counterintelligence services; education, training, awareness, and motivational public speaking presentations; and news media and film and TV production consultation. He is the creator of the ForensIQ C.S.I. Checklist™ App, which is the first and currently the only mobile app of its kind that has been created to assist law enforcement and criminal investigation professionals while in the field conducting crime scene investigations.

His academic position as Senior Lecturer has been held concurrently throughout his professional career. It includes teaching criminal investigation and forensic sciences courses while managing the Crime Laboratory for the University of Maryland at College Park, Department of Criminology and Criminal Justice. He is a certified instructor with the State of Maryland Police Training Commission, who has taught hundreds of police officers in basic police and in-service training academies.

He is an accomplished author, who besides writing this treatise, has written The Dollhouse Murders, illustrating crime scene dioramas used to study the crime scene investigation (CSI) process; the e-textbook, Introduction to Criminalistics—From Crime Scene to Court Room, used in his blended academic courses; and most recently in 2021, Public Speaking for Criminal Justice Professionals—A Manner of Speaking, that documents the skills obtained during his years as a teacher, trainer, and public speaker. A sought-after forensic sciences consultant, he is regularly interviewed by newspaper, television, and radio news media. He has appeared on ABC World News Tonight, CBS Sunday Morning News, and Fox and MSNBC cable news shows. He has been featured as an on-camera forensic consultant on television documentaries, including The Discovery Channel’s Lizzie Borden Had An Ax, and several episodes in Investigation Discovery (ID) Channel’s series, Forensics: You Decide and Reasonable Doubt. He is the host of the webcast show he created, “ForensicWeek.com,” broadcast and archived on www.ForensicWeek.com.

His vast public speaking experience includes the presentation of hundreds of counterintelligence awareness briefings and forensic science lectures at numerous universities and law schools, as well as presenting his motivational seminar on public speaking communications, Motivation through Communication.

He is a recipient of the U.S. Department of Defense, Exceptional Civilian Service; holds the degrees of bachelor of arts from Suffolk University, Boston, Massachusetts, and master of forensic sciences from The George Washington University, Washington, D.C.; an active member of the American Academy of Forensic Sciences (Fellow), International Association for Identification, Maryland Polygraph Association, and Operations Security (OPSEC) Professionals Society; an FAA Certified Remote Pilot for small Unmanned Aircraft Systems (sUAS); and member of Maryland’s Center for Forensic Excellence Advisory Committee.