A Tragic Fate: Law and Ethics in the Battle Over Nazi-Looted Art

During WWII many paintings met the same tragic fate as so much of the art that was stolen or purchased under duress during the Nazi occupation. Plundered art from that era has a clouded history echoing its former owners’ fate.
Publisher: American Bar Association 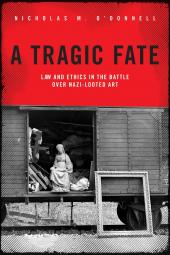 The organized theft of fine art by Nazi Germany has captivated worldwide attention in the last twenty years. Newly found works of art pit survivors and their heirs against museums, foreign nations, and even their own family members. These stories endure because they speak to one of the core tragedies of the Nazi era: how a nation at the pinnacle of fine art and culture spawned a legalized culture of theft and plunder. A Tragic Fate is the first book to seriously address the legal and ethical rules that have dictated the results of restitution claims between competing claimants to the same works of art. It provides a history of Art and Culture in German-occupied Europe, an introduction to the most significant collections in Europe to be targeted by the Nazis, and a narrative of the efforts to reclaim looted artwork in the decades following the Holocaust through profiles of some of the art world's most famous and influential restitution cases.

There is no simple, unifying principle to these debates of stolen art. When approached by the heirs of victims, many current possessors look for the right answer. Some are indifferent. Some see a more complicated story in which their own interests and public service are more important than what happened eighty years ago. Disputes not yet known or filed will be guided by the stories and cases that have already happened. The tactics of and choices made by the parties to such disputes many times reveal the heartbreaking struggles that began in the past and continue to affect the descendants of the original owners today.

A Tragic Fate: Law and Ethics in the Battle Over Nazi-Looted Art represents those stories.