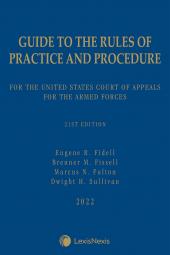 EUGENE R. FIDELL is an Adjunct Professor of Law at NYU School of Law, Senior Research Scholar at Yale Law School, and of counsel at the Washington, D.C. firm Feldesman Tucker Leifer Fidell LLP. He served as a judge advocate in the U.S. Coast Guard and co-founded the National Institute of Military Justice. He wrote Military Justice: A Very Short Introduction (Oxford 2016) and is a coauthor of Military Justice: Cases and Materials (Carolina Academic Press 3d ed. 2020).

Marcus N. Fulton is a judge on the Board of Veterans’ Appeals and a retired Navy judge advocate with 24 years of active service. His judicial experience includes service as a military judge and as an appellate judge on the U.S. Navy-Marine Corps Court of Criminal Appeals and the U.S. Court of Military Commission Review. He has extensive experience representing clients before military appellate courts and served as Division Director of the Navy-Marine Corps Appellate Defense Division.