Edited and co-authored by Rodney A. Malpert and Amanda Petersen
Publisher: ALM 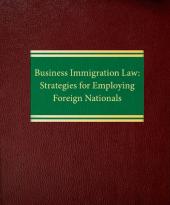 Finally, employing foreign nationals has been demystified! Business Immigration Law: Strategies for Employing Foreign Nationals guides you step—by—step through this intricate legal maze. An impressive array of specialists provides helpful and pragmatic advice on the nonimmigrant work authorization, including: specialty occupations (H-1Bs); intra-company transfers from abroad (L-1); and treaty traders and investors (E-1 and E-2). Coverage includes: tax issues; discrimination law problems raised by screening foreign nationals during hiring; how to avoid sanctions for I-9 violations; and the interaction between nonimmigrant and immigrant statuses. This book's appendices provide forms, guidelines, regulations and other helpful materials.