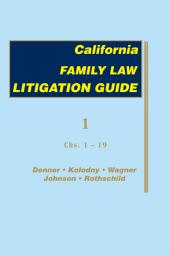 He is the author of numerous articles and lectures extensively on family law matters, including retirement benefits, interstate enforcement of support, and family law updates. He is a frequent contributor to the Beverly Hills and Los Angeles Bar, Family Law Sections Family Law Symposiums.

He is a former Adjunct Professor of Law at Whittier College School of Law in Los Angeles and while teaching there was a contributing author to the Whittier College Law Review. At Whittier he taught classes in trial practice, family law and community property.

He is a Member of the Board of Editorial Consultants of Matthew Bender's California Family Law Monthly and has written such lead articles as ''Celebrity Goodwill: Sic Transit Gloria Mundi,'' ''Nonmarital Cohabitation After Marvin: In Search of a Standard'' and ''Projected Average Salary in Pension Valuation: To Use or Not to Use.''

Judge Denner received his Bachelor of Arts degree with a major in Business Administration in 1962 from Occidental College in Los Angeles, California. He received his Juris Doctor degree from the University of California, Berkeley, School of Law in 1965.

Judge Denner's contribution to the California Family Law Litigation Guide has been motivated by his recognition of the need to assist attorneys in the integration of family law and evidence in the logical preparation and presentation of information on family law issues. While many works provided resources to research the law for the family law practitioner, none seemed to help the attorney gather the correct evidence and make a logical presentation to the court. Judge Denner's continuous involvement with this publication began with the launch of the California Family Law Trial Guide in 1992.

The Honorable Earl Johnson, Jr., has been a Justice of the California Court of Appeal in the Second Appellate District for a quarter century and is the creator of the "TRIAL GUIDE" concept. Justice Johnson is a former trial attorney who conceived the major TRIAL GUIDE innovations while a Professor of Law teaching evidence and supervising the clinical programs at the University of Southern California Law Center. He is the principal author of the California Trial Guide for use in civil trials. In addition to the Trial Guide series, Justice Johnson has authored or co-authored five books and 40 articles.

Justice Johnson received the first "Loren Miller Legal Services Award" from the California State Bar in 1977. In 1989, the Los Angeles Trial Lawyers Association named him "Appellate Justice of the Year," in 1991, the California Trial Lawyers Association gave him its "Outstanding Judicial Achievements Award," In 2003 the Consumer Attorneys of California named him the state's "Appellate Judge of the Year", in 2004, the Daily Journal named him one of the "Top 100 Lawyers in California" and that year he also received the "Aranda Access to Justice Award" from the Judicial Council, the California State Bar, and the California Judges Association. In 2006 the Los Angeles County Law Library gave him its "Beacon of Justice" award and in 2007 he was named the county's "Outstanding Jurist" by the Los Angeles County Bar Association's Board of Trustees for his "significant contributions from the bench through his or her judicial ability and experience; judicial temperament and demeanor; knowledge of the law; contribution to the improvement or education of the legal community; contribution to the practice of law and the community at large; and education and diligence."

Justice Johnson was educated in Chicago and became a member of the Illinois Bar in 1960. He received his B.A. with honors in economics from Northwestern University (1955). After three years as a naval officer, he earned his J.D. from the University of Chicago School of Law (1960), where he was an editor of the University of Chicago Law Review. He then became a Ford Foundation Fellow in Criminal Law and received his L.L.M. from Northwestern University (1961). In addition to Illinois, he is a member of the bars of California, the District of Columbia, and the United States Supreme Court. He served as a federal prosecutor with the Organized Crime Section of the Department of Justice and as a Director of the Legal Services Program of the Office of Economic Opportunity before joining the faculty at the University of Southern California.

The Honorable Frances Rothschild was appointed a Justice of the California Court of Appeal for the Second Appellate District in 2005 following her tenure as a Judge of the Los Angeles Superior Court. She has devoted much of her judicial career to family law. She was the Supervising Judge of the Family Law Departments in Los Angeles County in 1987 and 1988, and was assigned to a direct-calendar Family Law Department. She served three years on the Los Angeles Municipal Court before being elevated to the Superior Court in 1978.

Justice Rothschild attended Douglass College, Rutgers University, and UCLA, where she received a B.A. in Economics. She earned her LL.B. degree from UCLA, where she graduated Order of the Coif. Before her appointment to the bench, she was a law clerk to the Honorable Shirley Hufstedler. She also practiced litigation law in a private law firm and was a member of the Office of the General Counsel of the California State University and Colleges.

Justice Rothschild has authored an article on "Custody" in the Family Law Symposium, has been an editorial consultant for the National Center for State Courts on the "Child Support Enforcement Judicial Curriculum Guide," and lectured both to California and national audiences on family law subjects. 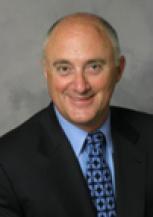 Mr. Wagner has been a Certified Family Law Specialist since 1981and has been a partner since 1984 in the Sacramento law firm of Dick & Wagner, specializing in complex family law matters, including issues relating to fiduciary duties, characterization, tracings, business valuations, and support.

Mr. Wagner, who entered private practice in 1975, is a Diplomate of the American College of Family Trial Attorneys and permanent faculty member of the ABA's Annual Family Law Trial Advocacy Institute (an 8-day course). In 2006 he was selected as the Southern California Chapter of the American Academy of Matrimonial Lawyers' Family Law Person of the Year. Mr. Wagner has been selected for each edition of Best Lawyers in America since 1987. He is a member of the Hall of Fame of the Association of Certified Family Law Specialists (ACFLS-2003). He has been a speaker for more than 150 CLE programs since 1980.

Mr. Wagner is a coauthor of Complex Issues in California Family Law, which is a 10-volume series written to provide the family law bar and bench with the most in-depth analysis available of the family law issues being addressed. The series comprehensively addresses the issue in question, including its historical origin and modern application, its practical effect on the practice of family law and proposals for a legislative change, if deemed necessary. He is also a consultant to Kirkland, Lurvey, Richmond & Wagner, California Family Law Practice and Procedure, 2nd ed., and a regular contributor to the California Family Law Monthly.

Mr. Kolodny was admitted to practice law before the California and Federal Courts in 1966. He has been a Certified Family Law Specialist since the inception of that program in 1980 and continues to practice Family Law, handling complex property characterization, valuation and custody litigation issues.

Mr. Kolodny is a founding Diplomate of the American College of Family Trial Lawyers. Each year since 1989, he has also been selected as one of twelve family lawyers to serve as an adjunct professor at the University of Houston for the American Bar Association's Family Law Trial Advocacy Institute.

Mr. Kolodny's has been involved in the International Academy of Matrimonial Lawyers since 1988, including as a member of the Board of Governors and the publisher of its newsletter from 1993-1998. Mr. Kolodny has frequently lectured to the IAML on issues of complex trials as well as published articles for them on the subject of international collection of judgments and enforcement of matrimonial judgments.

View all products by Stephen A. Kolodny (2) 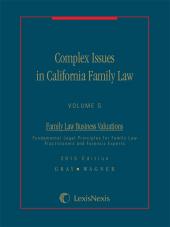 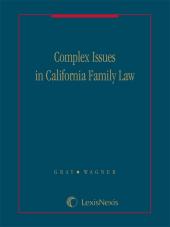