The 2015 edition incorporates the amendments to Title 28 signed into law through May 2015, including both sessions of the 113th Congress.
Publisher: Carolina Academic Press 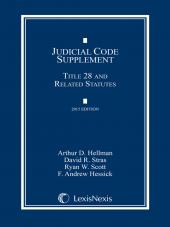 The 2015 edition incorporates the amendments to Title 28 signed into law through May 2015, including both sessions of the 113th Congress. Footnotes and (for important revisions) textual notes flag substantive changes in the Code since the book's initial appearance in 2005. This feature, unique to this Code Supplement, enables teachers as well as students to trace the evolution of the Code over a period of years. This Supplement can be used with any Federal Courts casebook.

The 2015 edition includes the important changes adopted by the 112th Congress in 2011 and 2012. These changes were the product of four separate enactments: the “Holmes Group fix” that was part of the Leahy-Smith America Invents Act; the Removal Clarification Act of 2011; a removal provision enacted as part of a defense authorization act; and, most important, the Federal Courts Jurisdiction and Venue Clarification Act of 2011 (JVCA).

• The “Holmes Group fix” added a new removal provision (§ 1454) to Chapter 89 and revised § § 1338 and 1295 (a).
• The Removal Clarification Act dealt solely with removals under 28 U.S.C. § 1442, the federal officer removal statute.
• A little-noticed provision of the National Defense Authorization Act for Fiscal Year 2013 further amended § 1442. This is the provision that arguably goes beyond Article III. See Chapter 2 of the 2015 Supplement to our Casebook.
• The JVCA effected the most far-reaching package of revisions to the Judicial Code since the Judicial Improvements Act of 1990. It made substantial changes to the procedures governing removal based on diversity, and it entirely rewrote the provisions of Chapter 87 dealing with venue. It also revised the provisions of Title 28 that deal with alienage jurisdiction and the removal of “separate and independent” claims.

For the JVCA and other important changes to Title 28, editorial notes have been provided containing brief summaries of the revisions as well as the pre-2011 text of the Code sections affected.

Also included in the 2015 edition are other revisions to Title 28 made since the start of the 109th Congress in 2005. Among the more noteworthy are the changes resulting from the Class Action Fairness Act (creating new bases for original and removal jurisdiction) and the Military Commissions Act of 2006 (limiting jurisdiction over actions for habeas corpus “filed by or on behalf of an alien detained by the United States who has been determined by the United States to have been properly detained as an enemy combatant or is awaiting such determination”). In other notable changes, Congress substantially revised the provisions on exceptions to the jurisdictional immunity of foreign states (now §§ 1605 and 1605A), and it added a new section (§ 1260) to Chapter 81 on the jurisdiction of the Supreme Court.

Two laws passed by Congress in 2010 and 2011 are of interest from a Federal Courts perspective. The SPEECH Act adds a new chapter (Chapter 181) to Title 28. Aimed at the problem of “libel tourism,” Chapter 181 limits enforcement of foreign defamation judgments by American courts. Among other provisions, it creates a new federal defense to specified enforcement actions, whether brought in federal or state court; establishes a new basis for removal; and provides for a new kind of declaratory judgment action in federal court. Separately, Congress created a pilot program in certain United States district courts to encourage enhancement of expertise in patent cases among district judges. The law is set forth in the Appendix to Part One.

Also of interest from a Federal Court’s perspective is new section in Title 35 added by the America Invents Act of 2011 – a provision on joinder in patent cases that effectively repeals, for patent cases, the rules on joinder and consolidation in the Federal Rules of Civil Procedure. The new statute is included in Part II of this Supplement.