Building the Rule of Law: Firsthand Accounts from a Thirty-Year Global Campaign

This book tells the story of an unprecedented volunteer effort that answered calls from around the world for rule of law assistance.
Publisher: American Bar Association 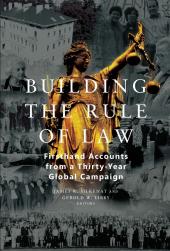 Following the fall of the Berlin Wall in 1989 and disintegration of the Soviet Union two years later, the world saw an unprecedented number of countries displace totalitarian regimes and seek to create new, freer societies based on principles of the rule of law. With only an older generation that had previously lived in democratic or free societies—or none at all—these countries faced enormous challenges. What tools or experience could they draw on to bring about such sweeping changes?

This book tells the story of an unprecedented volunteer effort that answered calls from around the world for rule of law assistance. Over the past 30 years, more than 5,000 unpaid volunteers, ranging from young lawyers to Supreme Court Justices, have responded through a series of initiatives often likened to a “rule of law Marshall Plan.” Hundreds of volunteers lived abroad without pay for a year or more in challenging, occasionally dangerous, circumstances. These inspiring efforts, still ongoing, have now extended to more than 100 countries. They have strengthened the rule of law and, in the process, changed the lives of countless people around the world, as well as the lives of scores of American volunteers themselves.