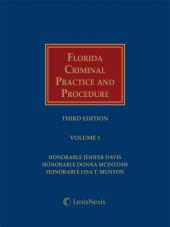 Jenifer Harris presides as a Circuit Judge for the Ninth Judicial Circuit (Orlando, Florida). She was elected in 2007. She has served mostly in the Criminal Division. Prior to being a judge, she worked as an Assistant Public Defender in Orlando and Gainesville. During her time as a Criminal Defense Attorney, she tried cases at all levels and became Board Certified in Criminal Trials.

Judge Harris is an Adjunct Professor at Barry Law School and teaches Florida Criminal Procedure and Trial Advocacy. She has also taught criminology, sociology and law courses at University of Florida, University of Central Florida, and University of North Florida. Judge Harris is faculty at National Judicial College. She has lectured at the Statewide Conference for Circuit Judges, Statewide Public Defender Conference, Florida Bar evidence seminar, FACDL Criminal Certification seminar and participated as faculty at the Prosecutor/ Public Defender Training program at the University of Florida.

Jenifer Harris is a triple Gator graduating from University of Florida: B.A. (1987); J.D. with honors (1990), and M.A. Sociology/Criminology (1999). Judge Harris has previously served on the Criminal Rules Committee and the Evidence Committee of the Florida Bar.

O. H. Eaton, Jr., was elected to the Florida Circuit Court in 1986. He retired at the end of 2010 after twenty-four years on the bench. He received a B.S.B.A. degree in 1965 and a J. D. in 1968 from the University of Florida. He served two years as an Assistant State Attorney and was a private practitioner for sixteen years.

Judge Eaton served as Chief Judge of the Eighteenth Judicial Circuit from 1989 until 1991, spending most of his tenure in the criminal division.

Judge Eaton has served on a number of committees and commissions including the Florida Sentencing Commission, the Court Technology Commission, the Supreme Court Legislative Review Committee, and The Florida Bar Criminal Law Section Executive Council. He is a past chair of the Criminal Justice Section of the Florida Conference of Circuit Judges. He served on The Florida Bar Criminal Procedure Rules Committee for many years and was Chair of that committee in 2000. He was a member of the A.B.A.'s Florida Capital Punishment Assessment Committee from 2004-2006. He served as Chair of the Supreme Court Criminal Court Steering Committee from its inception in 2002 until his retirement in 2010. He recently joined the Death Penalty Committee of the Constitution Project, Washington, D.C. Judge Eaton has authored numerous articles including the educational materials used in the Handling Capital Cases courses taught at the National Judicial College, University of Nevada, Reno, and the Florida College of Advanced Judicial Studies. Judge Eaton received the Selig I. Golden Memorial Award from the Criminal Law Section of The Florida Bar in 2009.

Since his retirement, Judge Eaton has served as a senior judge and as a legal analyst for WESH-TV in Orlando, Florida.

Judge Munyon has served as the chair of the Ninth Judicial Circuit Technology Committee since 2008. She was appointed by the Supreme Court to the Florida Courts Technology Commission in 2010 and was appointed chair of the commission in 2012. She served on the Florida Supreme Court Committee on Standard Jury Instructions in Criminal Cases from 2005 through 2010 and served as chair of the committee in 2009 and 2010. In 2014, she was appointed to the Supreme Court Committee on Standard Jury Instructions—Contract and Business Cases. Judge Munyon is on the faculty of “Handling Capital Cases, ” a mandatory education program for all Florida judges presiding over capital cases.

Before taking the bench, Judge Munyon served on various Florida Bar committees and was a volunteer guardian ad litem. She began her career as an Assistant State Attorney for the Ninth Judicial Circuit of Florida where she remained for ten years. After her tenure as a prosecutor, she spent nearly eight years in private practice, focusing on criminal defense. While in private practice, she received an AV rating from Martindale Hubbell. Judge Munyon received her Board Certification in Criminal Trial Law from the Florida Bar in 1997. She earned her bachelor’s degree in Finance and her Juris Doctor from the University of Florida.

Patrick Harris was elected as a Municipal Court Judge in Ohio in 2003. He served for twelve years prior to retiring in 2015 and moving to Florida. Currently Judge Harris practices criminal defense in central Florida, and continues to serve on the faculty of the National Judicial College in Reno, Nevada. He also is a frequent presenter for the Florida Association of Criminal Defense Attorneys, teaching both Fifth and Sixth Amendment law, and is an adjunct professor at the Barry University Dwayne O. Andreas School of Law in Orlando, where he teaches Trial Advocacy. 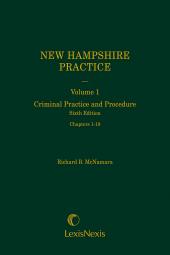 New Hampshire Practice Series: Criminal Practice and Procedure (Volumes 1, 2, and 2A)
Starting from $340.00 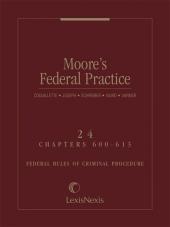