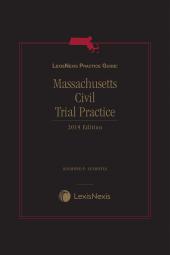 Containing over 40 checklists, 178 practice tips, and abundant cross-references to forms in Massachusetts Pleading and Practice, this task-oriented guide to the technical and legal aspects of trial practice provides succinct, easily accessible, comprehensive, authoritative analysis and solutions in the following areas:

•    Preparing and using a trial notebook

•    Preparing and delivering an opening statement

•    Preparing for and conducting cross examination

•    Meeting the burden of proof